jersey to cali to carolina

Finally, I’m getting headshots done. Elmer told me in January or February that he would do them for me. It’s been on me to reach out to him, but something has been holding me back. Not completely sure but I have an idea. A sense of entitlement, like I need to deserve to get headshots. I think since I’ve been writing so much and I start Groundlings classes soon and I’ve just been feeling so productive, it’s contributed to my positive “yes” attitude to go for everything.

I text Elmer in September. Hey, by any chance, would you still consider doing headshots for me? “Yeah sure.” Awesome! Like next month or November work? “I’ll talk schedule next week…traveling and might be gone for a while, so I’d rather shoot in the next couple weeks.” OK, whatever is best for you, I just wanted to lose a couple pounds haha. “Actors. So vain.”
Elmer never gets back to me. I don’t want to be annoying, so I stay out of his hair. One day, I’m riding my bike to work and he rides up next to me on his bike. “Heyyy!” Hey! We ride and talk about whatever. He finally brings up my headshots. “So, I’m not leaving until the end of November now so I can shoot your headshots whenever.” You’re such an asshole. I laugh, and he does too, because he never got back to me, but now I realize, if I want it to happen I have to make it happen. I can’t leave it on him.

So I text him late October. Let’s make this happen, if you can…I have off next week on Wed, Thurs, and Friday. Any of those days work with your schedule? “OK I’ll call ya after weekend.” This time I don’t let it wait. I get back to him five days later on a Sunday. I know you said you’d call me after the weekend but I wanted to get a head start! Think headshots are possible this week? “K, Thursday after 2:30. Come to my place. Bring three looks. No white. Come with makeup and hair done. Let’s see how we do. If you don’t break down crying about your acting career I charge less.” Haha I don’t make any promises. “Seriously, it happens a lot. Why I don’t do headshots much.” It totally will not happen with me. “Haha. Thought not.”

So Thursday at 3pm I’m knocking on his door and it’s happening. Elmer has told me his history with shooting actors in the past. One, they cry, and two, they can’t loosen up. I pull out a bottle of Woodford Reserve. Elmer turns on some music and I smile. Billy Joel. My favorite! He knows me so well. Bourbon and Billy Joel – doesn’t get much better than that. (Actually, I don’t like bourbon, I just want to like it, because it’s cool.)

I’ve brought different “looks” but I have no idea what I’m doing. I kept changing my mind on what to bring. At the last minute I threw in a blue tank, and those shots end up being the shots I like best. Figures. At one point, Elmer stops. “Did you bring make-up?” Well, I did, but just eye make-up. “You didn’t bring any powder?” Umm, no, I don’t own powder. I guess I should, huh? “Yes. I usually touch up actors to get rid of the shine.” Right. Guess I’m just going to have to be shiny! 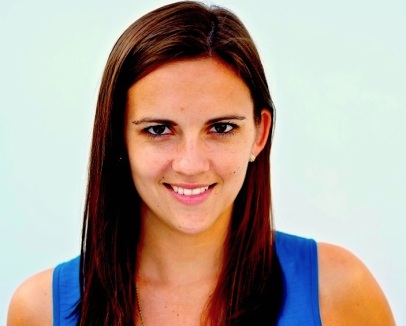 Elmer is great. He talks to me the whole time, and stops to have conversations with me and find out what’s going on in my life. Maybe he does want to know, but he’s really only doing it so I can relax and be myself. My last head shots were not me. They were me posing. You can tell I’m holding a smile in them, and that’s the last thing you want in a headshot. Actually, I have no idea what a headshot should look like at this point. I think I do, but every time I turn around someone is telling me the opposite or something new. I wish they weren’t so important, but they really are. Either way, my goal for today is to be as natural as possible and get different looks.

By the end, I’m exhausted. Weird that smiling can take so much out of me! Elmer uploads the 450 pictures to his computer. We sit together and go through every single one, deciding which we like and which we don’t. Ugh. Finally, we narrow it down to about 10. I’m sure I should look at them again with fresh eyes in the morning, but for now, I’m spent.

Honestly, my favorite pics are the ones of me drinking bourbon and looking away from the camera. Elmer likes one and starts playing around with it. Oh yeaaa, fb pic. We haven’t gone over cost yet. When he initially offered, he said he’d do it for free, but that’s ridiculous. I tried to bring it up when I arrived, but he said we could figure it out later. No matter what, it’s a deal, and thanks to Elmer it was a fun experience.

2 thoughts on “River of Dreams”